Here you can find a little piece of paradise! Our Resort Capo Boi on Sardinia's south coast is in the most stunning location and features its own sandy private bay. Right outside your doorstep you can discover an underwater world of shimmering colours. Furthermore our hotel is situated in the middle of a conservation area, meaning the untouched and divine surroundings are yours to discover. Or would you prefer relaxing by our Infinity pool - read a book or take a swim and enjoy the majestic views over the vast crystal clear blue sea.

Ask for the inclusions 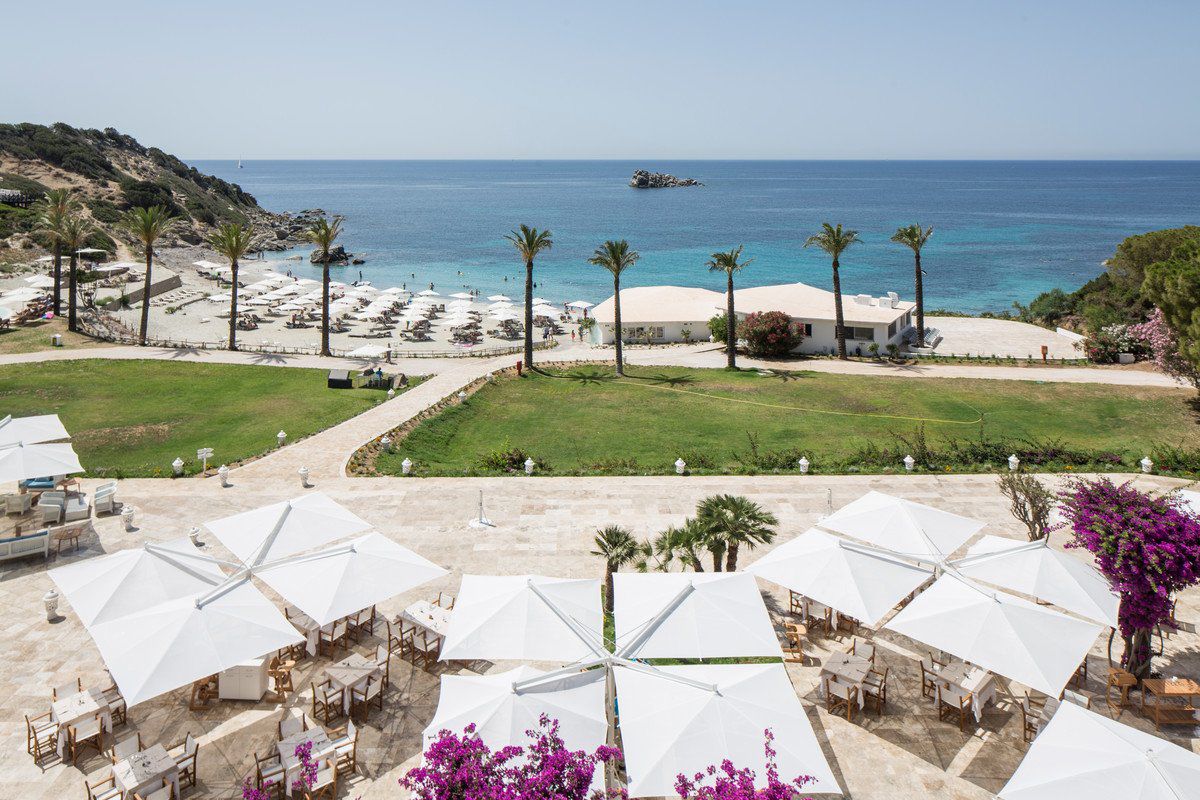 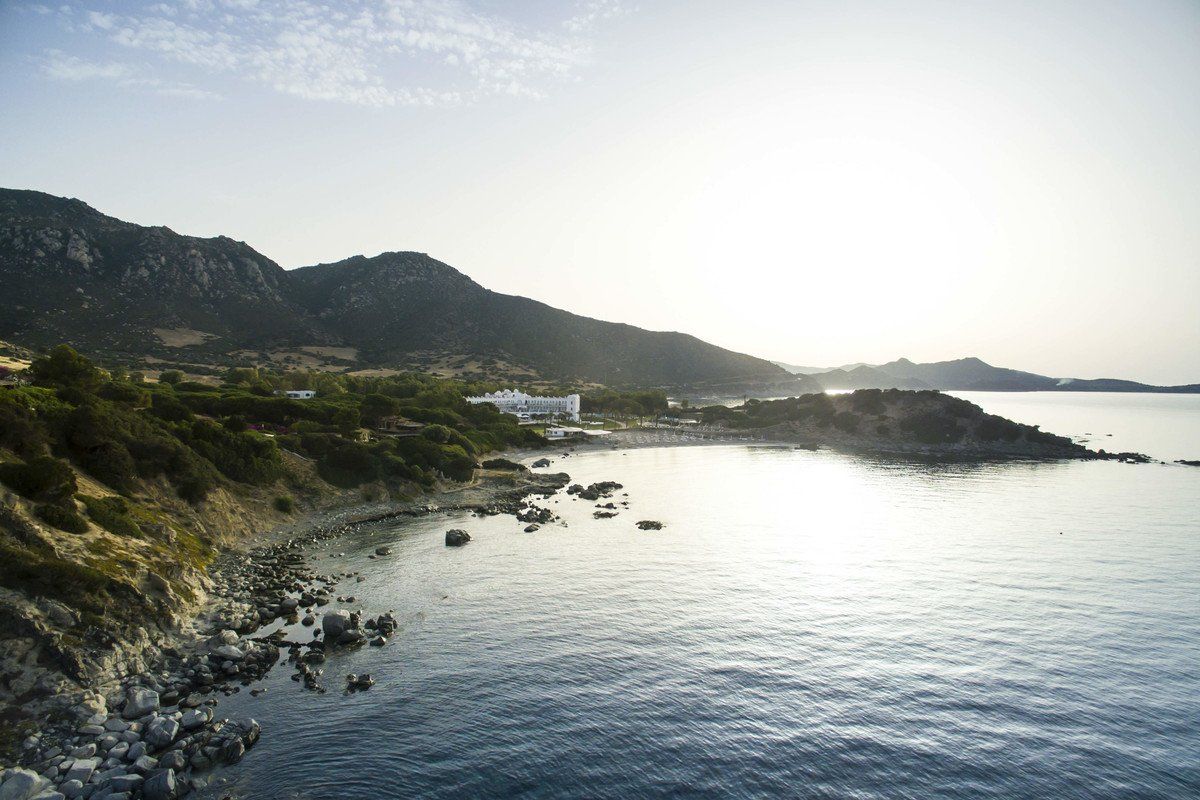 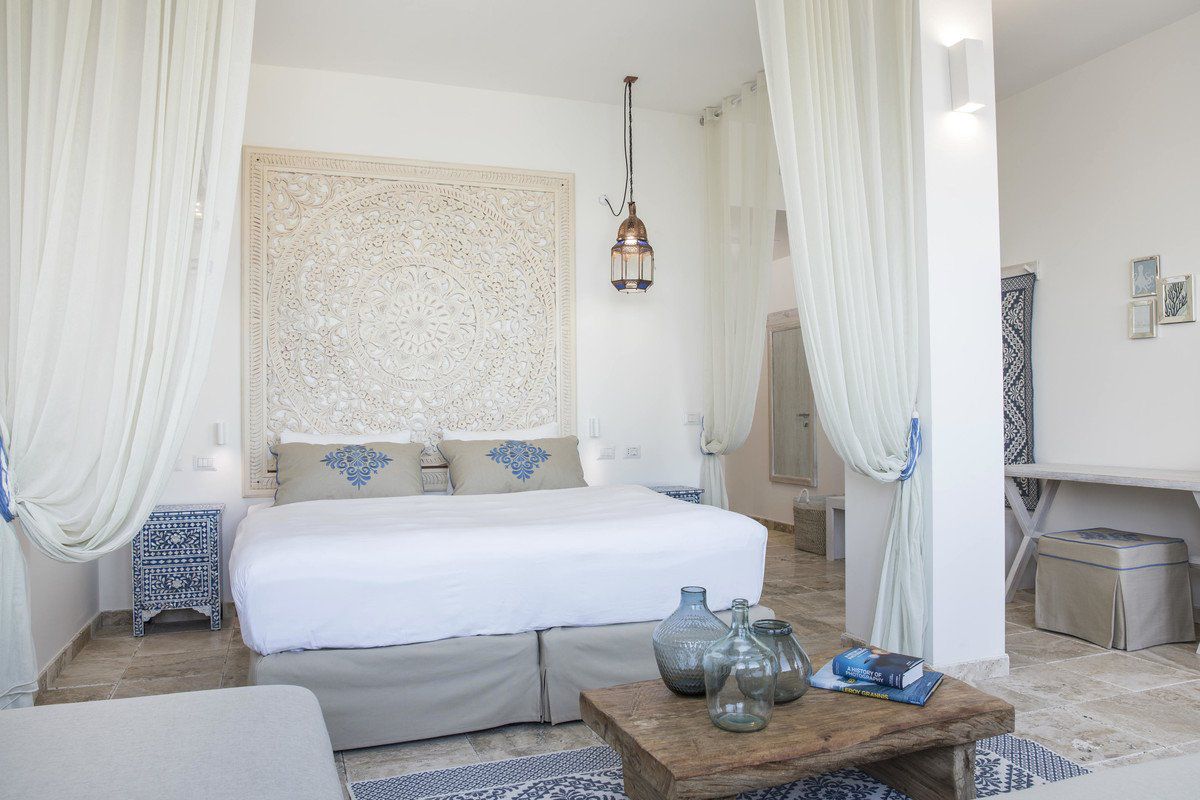 Here you can find a little piece of paradise! Our Resort Capo Boi on Sardinia's south coast is in the most stunning location and features its own sandy private bay. Right outside your doorstep you can discover an underwater world of shimmering colours. Furthermore our hotel is situated in the middle of a conservation area, meaning the untouched and divine surroundings are yours to discover. Or would you prefer relaxing by our Infinity pool - read a book or take a swim and enjoy the majestic views over the vast crystal clear blue sea.

Free use of all hotel facilities

Free bottle of mineral water in the room on arrival

Beach bag with bathrobe, towels and bathing shoes for the length of your stay

All season – Sports and activities

Live music & entertainment, a diversified program for young and adults

A voyage over an emerald sea, past characteristic coves and beaches of snowwhite sand … this is Sardinia, an island that strikes its visitors with natural contrasts, the lights and colors of a region that boasts old traditions and a wild and pure nature.

Situated in the middle of the Mediterranean Sea, Sardinia is a mainly mountainous region, without high peaks, with a vast and charming, yet bittersweet, natural environment. In fact, the presence of man does not seem to affect this territory; great surfaces still preserve their natural composition, luxuriant woods with even millenary trees, small desert areas and marshes inhabited by deer, wild horses and rapacious birds.

The sea reigns over this region with its colors that migrate into the coves, along the coasts, towards the beaches and the most popular resorts. An example is the Costa Smeralda (Emerald Coast) with Porto Cervo set as its gemstone and uniting the history and culture of ancient traditions with a joyful and colourful nightlife. Porto Cervo was named after its enchanting cove that resembles the antlers of a deer; the Old Port is considered the best-equipped touristic port in the Mediterranean Sea. Porto Rotondo is also a famous location; it overlooks the wide Gulf of Cugnana and is full of villas and piazzas swathed by such a splendid natural environment as this.

Those who prefer the mountains can explore the area of Gennargentu, the vastest mountain range in Sardinia; with its peculiar landscape, it proves that the loveliest painter of them all is Mother Nature herself. This region is rich in flora and fauna, with its mouflons, golden eagles, Sardinian deer and several other species now threatened with extinction.

Among its wonders, Sardinia offers the visitor the Nuragic complexes scattered all over the territory. These monuments are unique to the world, testifying to an ancient culture that - though it endured from the 16th to 15th Centuries B.C. still rains rather mysterious. The Nuragic constructions were built using great blocks of stone and developed around a central cone-shaped tower that communicates strength and power. These are archaeological sites where it is possible to grasp the archaic charm of ancient rituals and domestic life. Of these many constructions, the Barumini complex, in the Province of Cagliari, is among the sites in the UNESCO World Heritage List.

Like the rest of the island, the Province of Cagliari is of rather heteregoneous terrain: the variety of rocks is remarkable, as are the minerals, the highlands, the caves and the coasts.

The Molentargius-Saline Regional Natural Park, in the inner part of the province, is a rare example of an ecosystem in highly anthropized areas. It is one of the most important places in Europe for the extraordinary number of birds that shelter here. One-hundred-seventy-seven among 330 of Sardinia's birds species live in the Molentargius Basin - more than a quarter of all European bird species. At certain times of the year, these can exceed 20,000 specimens. Among these: flamingos, herons and little egrets.

The park borders with one of Italy’s most ample beaches, the Poetto, extending over almost five miles, and Cagliari's main beach. Next to the Capital is the Sette Fratelli – Monte Generis Regional Park, one of the largest parks on the island and a natural environment for the Sardinian deer. The Sella del Diavolo’s Promontory is also here - its name derives from the legend that Lucifer carved the profile of his saddle on the rock after being expelled from Paradise.

The eastern part of the Province is made up of the subregion of Sarabus-Gerrei, subjected to considerable drainage works at the beginning of the 20th Century in order to eliminate malaria: it is a wild zone, yet still abundant with characteristic villages.

The Province of Olbia-Tempio opens up to the Sea of Sardegna (a narrow channel that separates the island from Corsica) to the north, and to the Tyrrhenian Sea to the east; it borders with Sassari Province to the west and with the Province of Nuoro to the south. The province was established recently, thanks to a 2001 regional law that included a new subdivision of the Sardinian territory, doubling the number of provinces from four to eight.

The area has a surface of 2,111 sq mi (14.1% of the total) and includes 26 municipalities - Olbia and Tempio Pausania among them - as well as the Maddalena Archipelago, now a geo-marine national park.

Part of the historic Gallura territory, on the island's northeastern side, composes a section of the province, from the Coghinas River to Monte Nieddu in San Teodoro (with the exception of Viddalba and Erula), maintaining the Limbara range as a border on its south.

The land expresses itself via several different environments - sea, plains, hills, mountains, cultivated fields and desert areas. One of the unique elements rather evident in Gallura are the granite rocks, sculpted into extraordinary natural sculptures by the wind and the rain. Several oak forests fill out the landscape; from them cork (locally named ‘soft gold’) is extracted and used in a number of ways.

And for the archaeology enthusiasts, traces of the pre-Nuragic, Nuragic, Punic, Roman and Medieval civilizations still remain today. Another distinctive feature is the presence of scattered rural settlements called ‘stazzi’, small family-owned, agro-pastoral activities originally established by shepherds in the 17th-18th Centuries. Flourishing until very recently, the stazzi were progressively abandoned as people moved to the cities due to increased tourism over the last few decades. This phenomenon hit the area surrounding Arzachena in particular, inhabited only by a few farmers and shepherds even up until the mid-20th Century.

In 1962, the Arab Prince Aga Khan IV decided to embark on an exceptional touristic and real estate endeavor with the creation of the ‘Costa Smeralda Consortium’, taking advantage of the natural beauty of the area to make it a paradise for high-budget tourism. Today, this part of Sardinia is one of the most exclusive destinations not only in the country, but in the whole world.

SARDINIA: Let's warm up a little longer before the cold arrives

SARDINIA or CARIBBEAN? SARDINIA, WHAT ELSE!

Great offers based on the Caribbean island of the Mediterranean